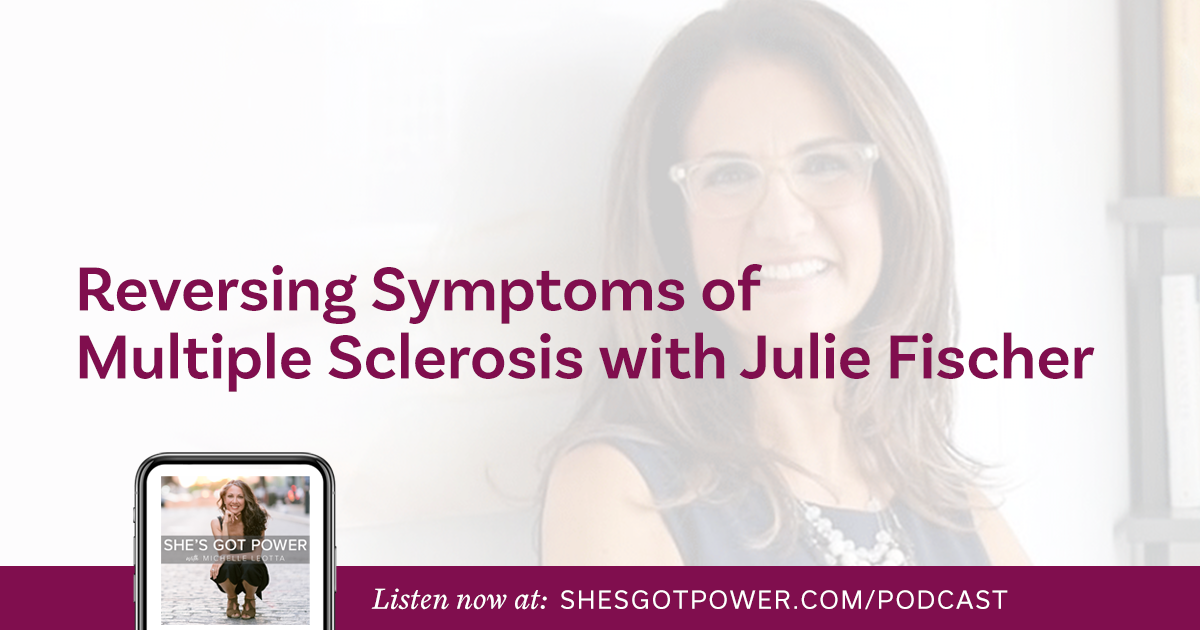 Today’s guest, Julie Fischer, was diagnosed with Multiple Sclerosis (MS) after four years of unexplained symptoms and multiple doctor visits with inconclusive tests. Since then, she’s been living life a bit differently to manage (and even reverse) symptoms…and helping clients do the same.

Julie Fischer (00:00):
But I'll sort of say like one more step. I can take this step. I can take this step. I'm feeling good. I'm walking. Like just kind of really acknowledging myself in my own body, trying to move in some way every single day. Cause of course with Ms. I mean, yes, there's the headaches and cognitive things and, and things like that, but really it's about movements.
Michelle Leotta (00:20):
It's time to stop being the victim of your overscheduled life and become the most powerful version of yourself. Welcome to she's got power.
Michelle Leotta (00:36):
Did you know that without proper sleep for even a couple of nights, your gut microbiome shifts and it makes you more prone to disease and weight gain. That's why I tell my clients that if they have to choose between getting a full eight hours of sleep at night or getting up real early to work out, choose sleep every time. Now, sometimes especially as we get older or when we're feeling stressed, sleeping becomes a little more difficult. Doesn't it. I completely rely on sleep masks to help me sleep better. And I have tried so many, I finally found one that fits really comfortably. It's customized the proportions of my face and it's designed to block out all the light yet. Like all of it, nothing sneaking through the cracks I've been wearing manta sleep masks for more years than I can remember at this point. And I think you're going to love them.
Michelle Leotta (01:28):
It's a small investment that has huge payoffs go to she's got power.com/manta M a NT a and get 10% off your first order. Thank me later. Well, Hey there, the fall is off to a super busy start. My boys are doing fall ball, which means the joy of sitting at baseball games several days per week and running them around to practices. Isn't just confined to the spring. I get to do it all throughout the fall too. As you can tell, I'm very excited about this. And of course, this is all a lot of sarcasm. I do love that they're involved with sports and friends. It just, you know, gets to be a lot. I'm the kind of person who, when I do something, I wanna do it right. Therefore I have to really try hard to not take on too much, or I will burn right out.
Michelle Leotta (02:18):
And to be honest, baseball schedules push me extremely close to my edge. Today's episode is with my friend colleague and fellow health coach, Julie Fisher, and Julie and I are so alike in this regard. She is very thorough, very on top of her stuff. She likes to do things right, but years ago, Julie was curled up on her office floor and experiencing a myriad of symptoms that just didn't make any sense. And it took years for her to be properly diagnosed with multiple sclerosis or Ms. Which if you don't know, is an autoimmune disease. Like so many women who are suffering with autoimmune disease, Julie needed to learn how to do life a little bit differently and manage, and actually reverse her symptoms, which she did. I give her so much credit because I've spoken to lots of women who are facing autoimmune issues and specifically Ms. And many of them kinda throw up their hands like, eh, there's nothing I can do. They're just hoping for the best and playing the waiting game. Do you know anybody like that? The truth is there are things that you can do to lessen and even reverse autoimmune symptoms and slow the progression of disease. So here's Julie's story, which is frankly triumphant.
Michelle Leotta (03:35):
Hey Julie, thanks for being on the show today.
Julie Fischer (03:37):
Thanks for having me.
Michelle Leotta (03:38):
I love that every woman I interview for the show has some sort of story where they've hit rock bottom. And when we were just chatting earlier, yours sounded very similar and you said I was curled up on the floor. So why don't we start there when you were curled up on the floor, tell us what was going on.
Julie Fischer (03:55):
So I was working at Macy's at the time I had been working in the corporate world in New York city for close to 20 years, by the end, by that time. And I was working in the kids department and I was kind of doing different. I wanna sort of part-time things that was sort of wherever I was needed is where I was working. So I worked there full-time for a while. Won't get into the whole story, but once I had kids, I always just kind of filled in like where I was needed. So they just kept me on for several years after finishing my real full-time management job. So I was in the kids' department noticing I was just kind of super tired all the time, having headaches, having unexplained pain, and literally in the kids' department had all sorts of samples of rugs and big stuffed animals and things like that all around.
Julie Fischer (04:43):
And there were many days that I would just think that looked much more appealing than sitting up in my chair and looking at a computer screen. And I would shut off the light in my office and just lie down on a shaggy sheep, something