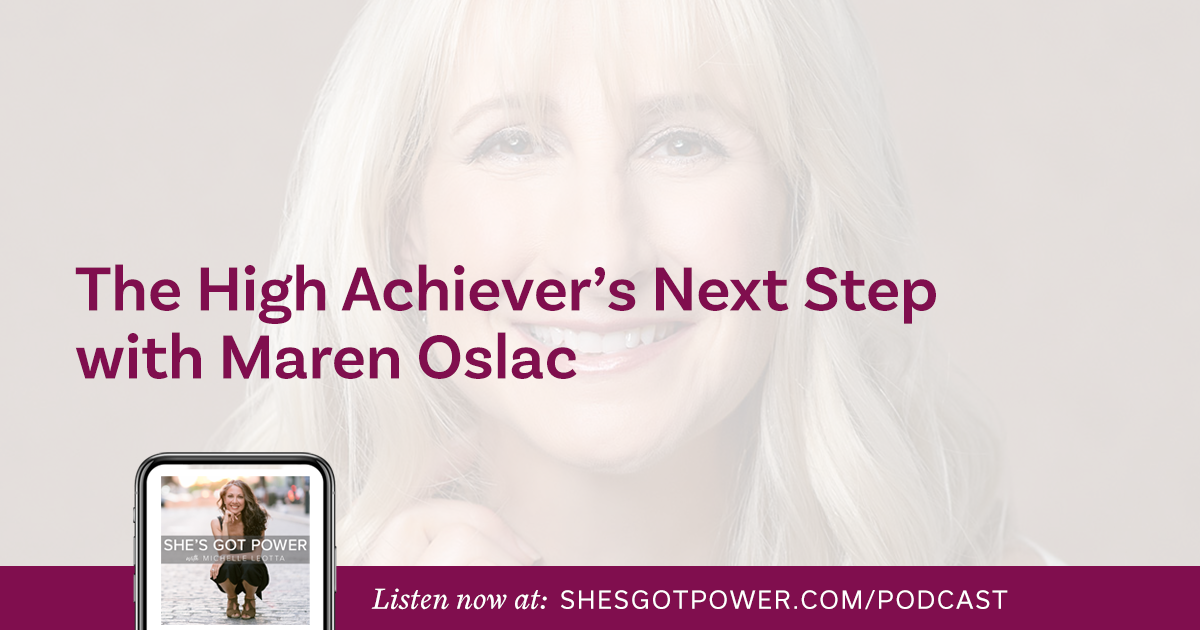 We’ve all felt that masculine energy of pushing our way forward or climbing the next rung on the ladder. In today’s episode we’ll explore the feminine side with guest, Maren Oslac. She shares how her many years as a partner dancer helped her embrace femininity and learn to be rather than do as a high achiever. If you’re wondering what comes next after a life of hustle…this is it.

Maren Oslac (00:00):
It literally is surrendered because it's doing nothing. And yet it is completely ready to move and, and be active at any moment. It is waiting in poise. And that's how I think of the feminine. We have this, it's receptive. It's, it's allowing, and that doesn't mean that it's doing nothing.
Michelle Leotta (00:26):
It's time to stop being the victim of your overscheduled life and become the most powerful version of yourself. Welcome to She's Got Power.
Michelle Leotta (00:41):
Winter weather can be tough on skin. So I've worked with my favorite skincare brand and Marie Skincare to bring you their three step trial kit for just 1999. It includes their allo, herb cleanser, anti-aging serum and anti-aging facial oil. It's a three step routine for gorgeous skin through the winter and beyond. I love these products because they work and they're wild crafted and made with organic, unrefined herbs and botanicals. All the good stuff, guaranteed to decrease the look of fine lines and get you glowing. Oh, and they're giving away a free full size all natural antioxidant lip balm. And the shipping on all of it is free in the US and Canada. Go to, she's got power.com/skincare bundle.
Michelle Leotta (01:36):
The other day I was talking about some loose plans that I might have for the future, maybe some real estate investing, I don't know. And my boyfriend stopped me and he said, you know, you aren't climbing a corporate ladder, but you're always climbing some kind of personal ladder. And I thought, yeah, yeah, that's about right. So if, if you're like me, if you're more of a high achieving type person, you know what that feels like, I think it can be an excellent quality. It can also mean that sometimes we're so wrapped up in what's next, that we don't stop and smell the roses today and appreciate how far we've come. And at a certain point we might wonder, well man, what is next? You know, I've done X, Y, and Z in my life. Where do I go from here? Well, my guess today is Barron Osec, a business evolver with a passion for excellence and a drive to help successful leaders wake up and up level their lives and their businesses pay attention. Towards the end of our interview, when Mar describes the cat waiting at the mouse hole and the very different energies that we can bring to our striving, our achieving mindsets, I think you'll like this. Maren, thank you for joining me today.
Maren Oslac (03:01):
I am honored and excited to be here.
Michelle Leotta (03:05):
Uh, we were just chatting before I hit record and you mentioned something about being a dancer, being a competitive dancer. And I have to tell you, first of all, I grew up competitively dancing. And so many of my clients are either ex gymnasts or dancers or competitive swimmers. Like I feel like many women who fall into this high achiever category. I don't know if we've always been that way and that's why we did the thing or we did the thing and it turned us into women who always wanna achieve. But tell us a little bit about your dancing. Well,
Maren Oslac (03:36):
I think that my own personal theory is that we are very grounded in our bodies and being physical is part of that, knowing yourself. And I think a lot of people who are high achievers have that aspect of we don't just wanna be intellectual, we want both sides. We wanna embody it and also like really go for it in life. And you know, all of the things that, that we're taught to want, it's like, right, let's go get it. It includes all of it, including the physical so
Michelle Leotta (04:12):