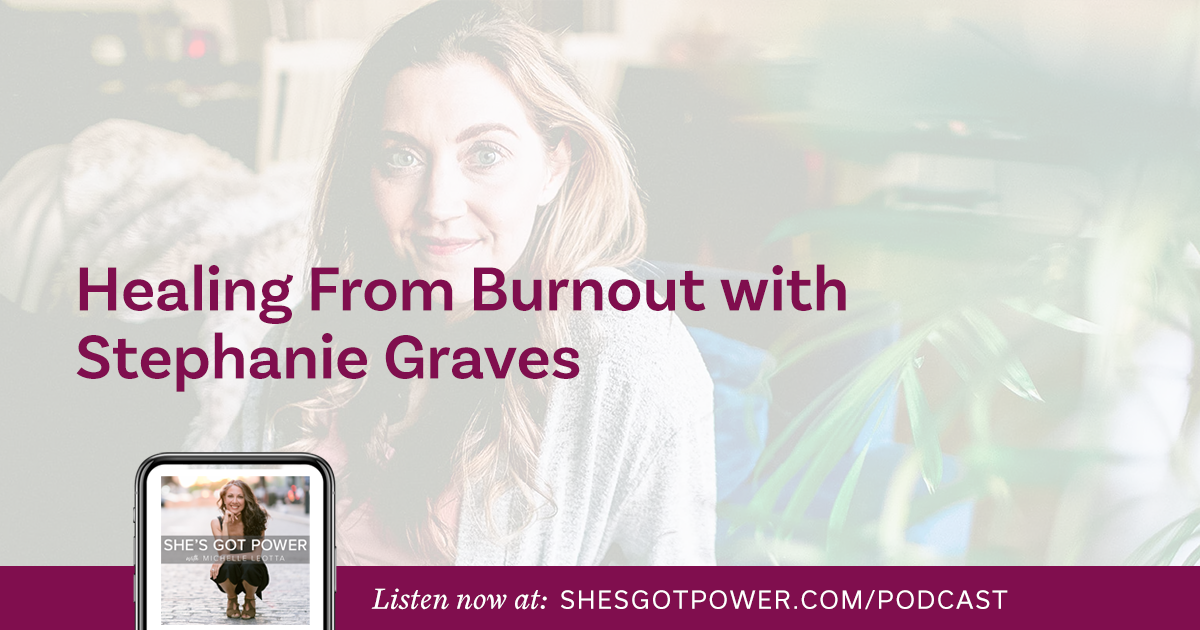 Are you feeling worn down, experiencing symptoms you can’t explain despite receiving “normal” lab results, or just overwhelmed by going through life? You might be experiencing burnout, something that’s as common as it is debilitating.

Today’s guest Stephanie Graves experienced a level of burnout so extreme that it took her years to get to the root cause and turn her life around. She made a breakthrough when she found functional medicine and nutrition. And if you’re looking for a way to beat burnout too, functional medicine can help you prioritize your physical, emotional, and mental health.

Stephanie (00:00):
Everything that I've done and everything that I currently do, I generally do 120%. Uh, now I'm working to be more mindful to not do it also at a thousand miles an hour, to know that it will get done in time and that it doesn't have to be perfect. It's easier said than done for sure, especially when you have these qualities to kind of slip back into that. But again, it becomes very obvious when your body is not in a healing state and when it's in that fight or flight mode, you can feel the difference.
Michelle (00:37):
It's time to stop being the victim of your overscheduled life and become the most powerful version of yourself. Welcome to She's Got Power.
Michelle (00:52):
Winter weather can be tough on skin. So I've worked with my favorite skincare brand and Marie Skincare to bring you their three step trial kit for just 1999. It includes their allo, herb cleanser, anti-aging serum, and anti-aging facial oil. It's a three step routine for gorgeous skin through the winter and beyond. I love these products because they work and they're wild crafted and made with organic, unrefined herbs and botanicals. All the good stuff, guaranteed to decrease the look of fine lines and get you glowing. Oh, and they're giving away a free, full size all natural antioxidant lip balm, and the shipping on all of it is free in the US and Canada. Go to, she's got power.com/skincare bundle.
Michelle (01:47):
One thing I've noticed over the years of doing this podcast and the many years of working with high achieving go-getter women, it's, the stories are always so similar. You put a lot of pressure on yourself, right? And it's likely started at a young age, and it probably came from something going on in your family dynamic. You might have an array of odd health symptoms by the time you're 2030, definitely by 40, you're almost absolutely feeling exhausted. I mean, that's a given beyond the beyond kind of tired. Well, today I'm sharing a story from a colleague of mine in the field of nutrition and wellness. Stephanie Graves is a second grade homeschool teacher in Karaba Valley, Maine and a functional medicine nutritionist. And she's a really great example of exactly what I'm talking about here. Someone who burned out, always doing things to the nth degree and pushing too hard. And she's great at explaining some of the science of what's going on in the body when burnout happens. Let's have a listen. Stephanie, welcome to the show.
Stephanie (02:54):
Thank you so much for having me. I'm excited to be here.
Michelle (02:58):
I feel like we should start your story at the point where you are asleep at the rest stop because you couldn't even drive all the way to work without needing a nap in the middle of the drive. Tell us about that.
Stephanie (03:12):
Yeah, so my burnout came to a point where it was so severe. There was a lot of other constellation of other physical and emotional and mental symptoms happening, but the fatigue became so unbearable that I really couldn't ignore it anymore. At that time in my life, I had three kids, four and under. I was the primary breadwinner. My husband was staying at home, I was working as a pa working 12 hour shifts, commuting one hour each way to work. And I was also still running competitively running marathons, training for that. I, meanwhile, my marriage was having some serious problems as my husband was struggling with substance abuse. So needless to say, there was a lot going on and I'd always been someone who just kind of pushed through and never really thought that there was ever be any consequences for that. I just always kept adding things to my plate and going, going, going.
Stephanie (04:12):
And eventually it got to a point where my body was like, you need to take the foot off the gas. And so, yeah, I mean it was so severe that while I was commuting to work, there'd be days when I was just so exhausted from being awake for two hours that I had to take a nap on the way to work in a rest area, and then I'd get to work and work, you know, six, eight hours and then it'd be sometime mid-afternoon after I've had probably three cups of Starbucks already, that I would have to go out to my car and be like, everyone, I'm just gonna go check out for a little bit, take a quick nap in my car so I could finish the rest of my workday and drive a hour back home. Yeah, and I mean, for me, much like many other people, I went to my primary, they did a whole bunch of labs, everything was normal.
Stephanie (05:03):
I saw specialists, I saw a nutritionist, and no one could really tell me what was wrong. And it wasn't until functional nutrition came into my life because due to my tenacious spirit, I guess I was not just going to take that for, you know, an answer that, oh, you're just tired, you're a mom, it's normal. Yeah, yeah. So I took my health into my own hands and that's when I started studying functional medicine and functional nutrition and realized that not only this debilitating fatigue, but so many other things that were happening in my life and around me were also a result of this. So not having a menstrual cycle for 20 years, having chronically low blood blood pressure, I used to brag about how low my blood pressure was, thinking that was a good thing.